Time and again the ignorance and nonchalance with which even highly renowned directors simply ignore historic details is fascinating. They do this in spite of the fact that it should easily be possible to gain competent information and, with a minimum of historical diligence, to also correctly incorporate those resulting consolidated findings in the movie.

In this respect a rather positive example of this genre is the legendary movie “Battle of Britain” by director Guy Hamilton, released in the year 1969. This cine film, however, was produced under the guidance of no less a supervisor than Adolf Galland, former Luftwaffe Inspector General of Fighters. It seems that this fact not only lastingly resulted in a correct description of the historical events as such but also had a beneficial effect with regard to the attention to detail.

At that time today’s trick technology did not exist. Furthermore, by then there were no surviving, airworthy Messerschmitt Bf 109s type E available after the war as they were in use during the year 1940 at the time of the Battle of Britain. Therefore, Guy Hamilton had no other option but to rely on Spanish HA-1112-M1L “Buchon”s. Those were still airworthy and had been built under licence by the Spanish Air Force after the war. They had originally been true Messerschmitt Bf 109s, but in the meantime there was an optical catch. As the Spanish Air Force could no longer rely on German replacement parts for the original Daimler-Benz aircraft engines, after Germany’s surrender in May 1945 and the collapse of the entire German arms industry, they consequently equipped their Messerschmitt Bf 109s with British Rolls-Royce-Merlin engines. Those engines provided the Supermarine Spitfire with its characteristic frontal belly. But this belly now turned the originally perfectly sleek “Me 109” into what many German fighter pilots regarded as a disfigured “teratism”. My father, who had personally flown the “Me 109”, upon seeing a “Buchon” on the occasion of an air show immediately turned for home and left the air strip, stating in disgust: “this is anything but a Me 109!”. Of course he was right.

The fighter aircraft depicted in the movie “Battle of Britain” as “Me 109s” therefore had a drastically changed aircraft nose, which did not in any way correspond to the original Messerschmitt Bf 109 E. Another change was the four-blade propeller, while the original Messerschmitt Bf 109s used a three-blade propeller as well as the Supermarine Spitfire Mk.Is which were flown in combat during the Battle of Britain. Although during the movie air battle scenes Spitfires as well as Ha-1112s were used in historical terms with incorrect four-blade propellers–a fact which of course is hardly recognisable due to the rotation of the prop–Guy Hamilton’s film team nevertheless still made the effort to change this detail for ground displays. On the ground they implemented three-blade propellers, as the error would have been clearly detectable there. At least by any well-informed spectator. This is an attention to detail which is highly creditable. To anticipate it, Michael Bay had no hesitation in ignoring, in his view, such obviously “unimportant” details. 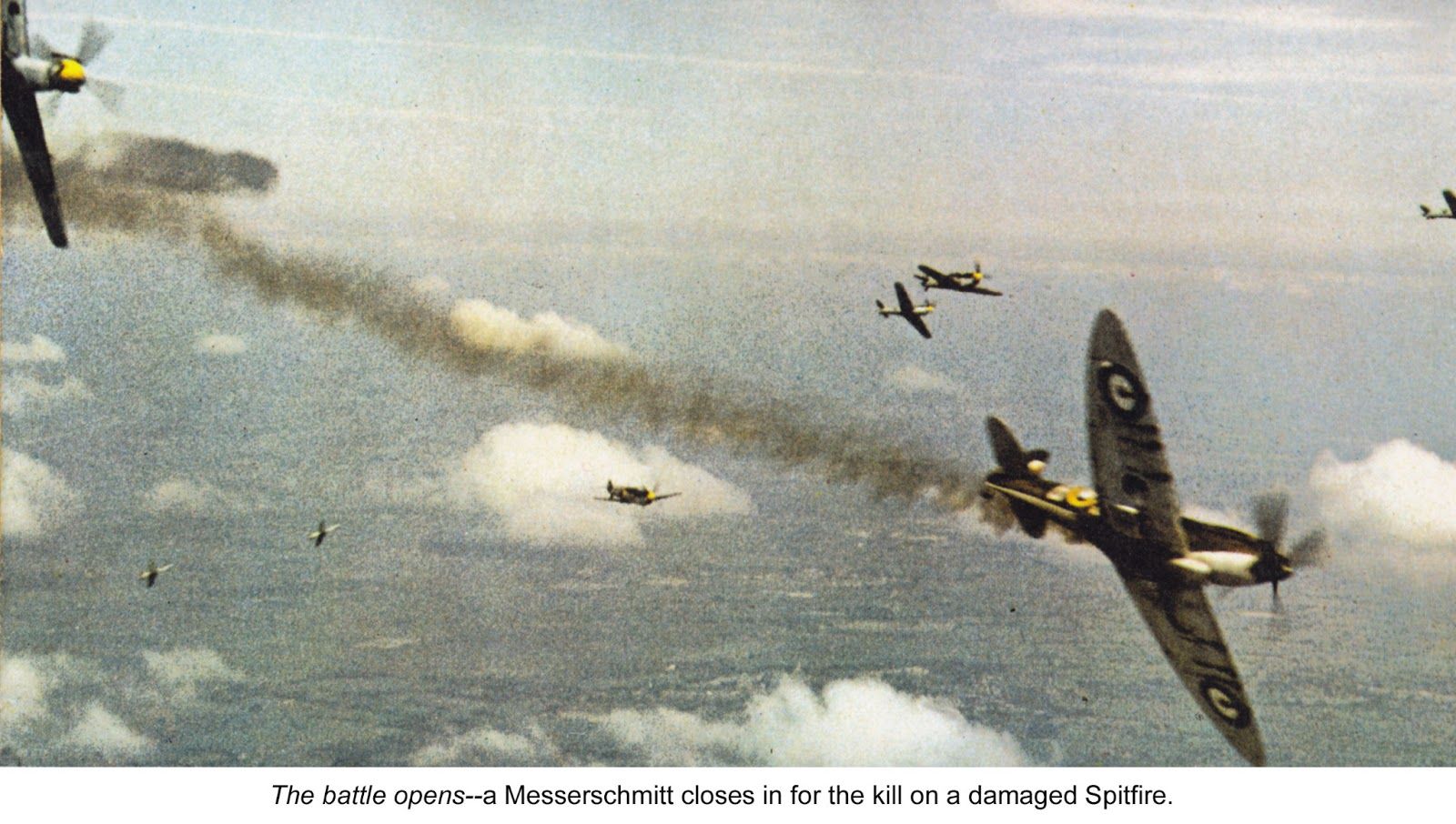 It is clearly recognisable in the screen shot that both aircraft in the foreground, the fleeing Spitfire as well as the hunting Messerschmitt Bf 109, have a four-blade propeller. The original aircraft of the time used a three-blade propeller instead. Watching the movie, of course, this is hardly detectable and therefore negligible.

This detail can also be seen in the following picture:

For the revealing ground shots this “error” is fortunately meticulously amended.

However, it should be noted somewhat critically that neither the obviously fictional emblem at the side of the “Messerschmitt” relates to a real existing Jagdgeschwader (fighter wing) of the period, nor does the code »CD« on the fuselage of the Spitfire correspond to any Royal Air Force squadron. Regarding the code please compare the following link: https://en.wikipedia.org/wiki/List_of_RAF_squadron_codes

Again this is a movie demonstrating a substantial degree of accuracy. Nevertheless, the director took the liberty of some historical inconsistencies, obviously for dramaturgical reasons.

The Boeing B-17 F-10-BO serial number 41-24485 of 324th Bomb Squadron/91st Bomb Group wearing her nickname „Memphis Belle“ was a real existing aircraft. It participated in the following missions:

Once again–similar to the movie “Battle of Britain”– this movie had to be made without today’s trick technology, using original aeroplanes. During the shootings the well-known German pilot Walter Eichhorn flew one of the fighter planes shown in the movie and told the author personally about the partially hazardous filming of the scenes. It required an extraordinary flying skill and had been rather perilous due to the danger of collision, especially during those head-on attacks (please compare the following screenshot. It shows four P-51 D Mustangs, distinguishable by the white stripes on their wings, which encounter incoming Messerschmitt Bf 109s in a frontal attack.). The aerial battle scenes were filmed out of a twin-engined North American B-25.

In this spectacular cinema movie the eponymous hero, the US fighter pilot Captain Rafe McCawley, volunteers for combat at the beginning of the year 1941 to the “Eagle Squadron” of the British Royal Air Force (RAF), which was built up by Americans. Indeed there were three “Eagle Squadrons” in the RAF.

According to Wikipedia 71 Squadron was equipped with the following aircraft types:

According to Wikipedia 121 Squadron was equipped with the following aircraft types:

According to Wikipedia 133 Squadron was equipped with the following aircraft types:

So what about historical precision regarding details in this movie? The period of time when eponymous hero Captain Rafe McCawley introduces himself to the alleged “Eagle Squadron” emerges from the movie. At position 0:49:06 after his assumed death after being shot down, it was apparently “July 1941”. Therefore, the eponymous hero clearly must have flown his sorties before!

Thus 133 Squadron, code »MD«, operational from July 1941 onwards, is out of the question. Alas, both other “Eagle Squadrons” were also not equipped with Supermarine Spitfires until July 1941, as is depicted in the movie. Instead they both used the fighter aircraft Hawker Hurricane at that time.

This, however, does not prevent the director from showing the eponymous hero climbing into a Spitfire. At the time in question there were indeed RAF squadrons equipped with Spitfires, but not the “Eagle Squadrons”. In fact, the most widely used subtype of the Spitfire in the spring of 1941 was the Mk.II.

As can be clearly seen, this type MK.II uses a three-blade propeller and is armed with eight machine-guns, which is indicated by the eight red square fields on the wings. It is not armed with any cannons, apart from the rather seldom produced version Mk.IIb!

This changed with the Spitfire Mk.V, which was predominantly produced as version Vb. This type was armed with two cannons and four machine-guns. The Spitfire Mk.Vs were delivered from February 1941 onwards. Therefore, this type would in principle be plausible during the time period in question regarding the missions flown by Captain Rafe McCawley, albeit by far not as likely as a Spitfire type Mk.IIa. The Spitfire Mk.Vb is easily distinguishable from the Spitfire Mk.IIa (although not so clearly from the much more seldom used version Mk.IIb) by the two cannons.

This version of the Spitfire was again equipped with a three-blade propeller, which allows a distinct differentiation from the Spitfire Mk.IX below, which was used from July 1942 onwards.

Now, what do we see in the Hollywood-movie?

The author does not wish to be regarded as conceited. But he allows himself the comment that all those details are easy to investigate, especially today in the age of internet, Wikipedia (even if this is not correct in every point) and Google.

Please note the two arrows, which point to two bulges on the fuselage. Those are typical for the Spanish Ha-1112 but do not exist in the case of the Messerschmitt Bf 109.

Now then. Again, in spite of the availability of modern visual effect techniques and an airworthy original  Messerschmitt Bf 109 E-3 existing in the United States, the director cannot avoid relying on the use of this “teratism” …

But neither the serial number nor the Code “LC” can be related to any real aircraft. This code belongs to an airfield guard section of the bomber (!) field RAF Feltwell, whose aircraft certainly never ever appeared over Dunkirk …

But regarding all this stuff I have no other option than to give Hollywood some smiling and not too serious advice in poetic form:

If your movie shall be free
of bungling, bricolage and flub,
then read my book and you will see,
your credibility will go up …