In many publications, even in YouTube contributions, it is emphasised time and again that as of 1943 the Messerschmitt Bf 109 was technically inferior to the enemy aircraft and should in fact have been taken out of service in favour of the allegedly significantly better Focke-Wulf 190 (A-series).

If that is the case, why then was it not replaced?

The Focke-Wulf 190 was, without a doubt, an outstanding fighter aircraft with cutting edge design. It was also easier to fly than the “Me 109” and above all easier to handle on take-off and landing due to its wider landing gear. In the hands of inexperienced trainee pilots the narrow landing gear of the Messerschmitt 109 (similar to the Spitfire, by the way) made crashes on take-off and landing a dangerous everyday occurrence. The author knows of fatal accidents within his own family. A further advantage of the Focke-Wulf 190 was the cockpit canopy mounted on the fuselage, providing all round visibility. This was a feature that, right up to the end of the war, the Messerschmitt pilots were never able to enjoy as such, even though the view from the cockpit of a later series of the Messerschmitt Bf 109, the so-called “Galland canopy”, which had very few struts, was considerably better than in earlier models of this fighter.

The Focke-Wulf (A-series), however, had serious drawbacks at altitudes above 6,000 metres. The engine performance here decreased markedly compared to the Messerschmitt Bf 109. The latter was therefore indispensable in aerial combat against the American escort fighters. These dogfights were often carried out at exactly these altitudes (6,000 to 8,000 metres). The Messerschmitt squadrons were supposed to protect their comrades in the Focke-Wulf fighters (who in turn had to concentrate on the bombers) from the American escort fighters—a task rarely able to be successfully resolved.

Was the Messerschmitt Bf 109 a match for the allied fighter aircraft by the end of the war?

As of summer 1943 the Messerschmitt Bf 109 G-6 series, in its role as a bomber destroyer, was so overloaded with additional weapons, that with gondola cannons under the wings they were far inferior to the rival models belonging to the Allies. However, even without these (removable) additional weapons the speed advantage of many of the allies’ comparable aircraft was considerable and dangerous, often further strengthened by their greater manoeuvrability and agility. The judgements made regarding the Messerschmitt Bf 109’s technical inferiority originate from this phase that lasted until the middle of 1944—and for this period, they are justified.

What they almost generally fail to consider, however, is that the Messerschmitt engineers did an outstanding job making their product competitive once again. As of the G-10 version in autumn 1944 but primarily with the K-4 “Kurfürst” version at the beginning of 1945 the feat was successfully accomplished. “Kurfürst“ is literally “Elector“ and the German nickname for the K-4. But the meaning of the word was not the reason for its choice. The first letter “K“ of “Kurfürst“ stood for K-4 as “Foxtrot“ for “F“ or “Whiskey“ for “W“ in today’s NATO Phonetic Alphabet. In the same way the E-variant of the Me 109 had been named “Emil“, the G-variant “Gustav“ and so on. In the hands of an experienced fighter pilot, who knew how to handle the advantages of the design and avoid its weaknesses, this improved fighter aircraft was once again a match for any allied opponent. This included the Supermarine Spitfire (at least the Mark IX) as well as the P-51D Mustang or the Soviet Yak-3 and La-7.

The climbing performance of the Messerschmitt Bf 109 K-4 was phenomenal and noticeably superior to any of the enemy aircraft. As the pilot of a “Kurfürst” it was, however, not wise to engage in a tight turning dogfight with a Spitfire and especially not with a Yak-3 or La-7. Above 6,000 metres, the German plane was so clearly superior to the Soviet aircraft that the Soviet pilots strictly avoided any aerial combat at this altitude. Below this, though, the boot was on the other foot, and whenever possible the German fighter pilots avoided dogfights with their Russian opponents. It was necessary to be familiar with the abilities of the Messerschmitt Bf 109 K-4 and, as far as tactical circumstances would allow, deploy them selectively and thus effectively. Used in this way, the “Me 109” was still a dangerous opponent.

Well—what was the phrase?  “As far as tactical circumstances would allow“. In view of the overwhelming numerical superiority of the Allies, this is exactly what was becoming an increasingly rarer occurrence. “It was necessary to be familiar with the abilities of the Messerschmitt Bf 109 K-4 and deploy them selectively and thus effectively.” Yes, as long as someone was able to fly the Messerschmitt Bf 109 K-4 accordingly. In the meantime, this aircraft was so highly sophisticated that expert handling of it demanded a considerable level of flying expertise. How many German fighter pilots were left and alive at the beginning of 1945 and had this expertise?

Those who had it often continued to fly their “trusted” Messerschmitt and preferred to do so until the very end, even though Focke-Wulf was then series-producing the D-9, which in the meantime was an altogether more efficient fighter aircraft than the “109”.

Therefore, one should not underestimate–and this unfortunately happens all too often–the combat power and competitiveness of the final Messerschmitt Bf 109 models, the G-10 and K-4, merely because there were fewer and fewer German pilots who were sufficiently competent to handle this thoroughbred fighter aircraft. This fails to do justice to the design and development work of the Messerschmitt engineers.

„The K-4 was armed with [two 13 mm cowl guns and] the deadly 30 mm cannon firing through the spinner. This weapon had been used sporadically throughout the G series as supplies permitted. It was a remarkable weapon in that two or three hits were usually sufficient to ensure a kill even on a heavy bomber. […]

The K-4 was the apogee of development for the Bf 109. It was a remarkable testimony to the original design and to the tenacity of Messerschmitt’s continuing development engineers, that the aircraft was still reasonably competitive as the war ended. The Luftwaffe had been defeated by a lack of fuel, inept pilot training and overwhelming numbers of enemies.

From the beginning to the end, the Messerschmitt Bf 109 was ever willing and able. A truly remarkable machine.“ 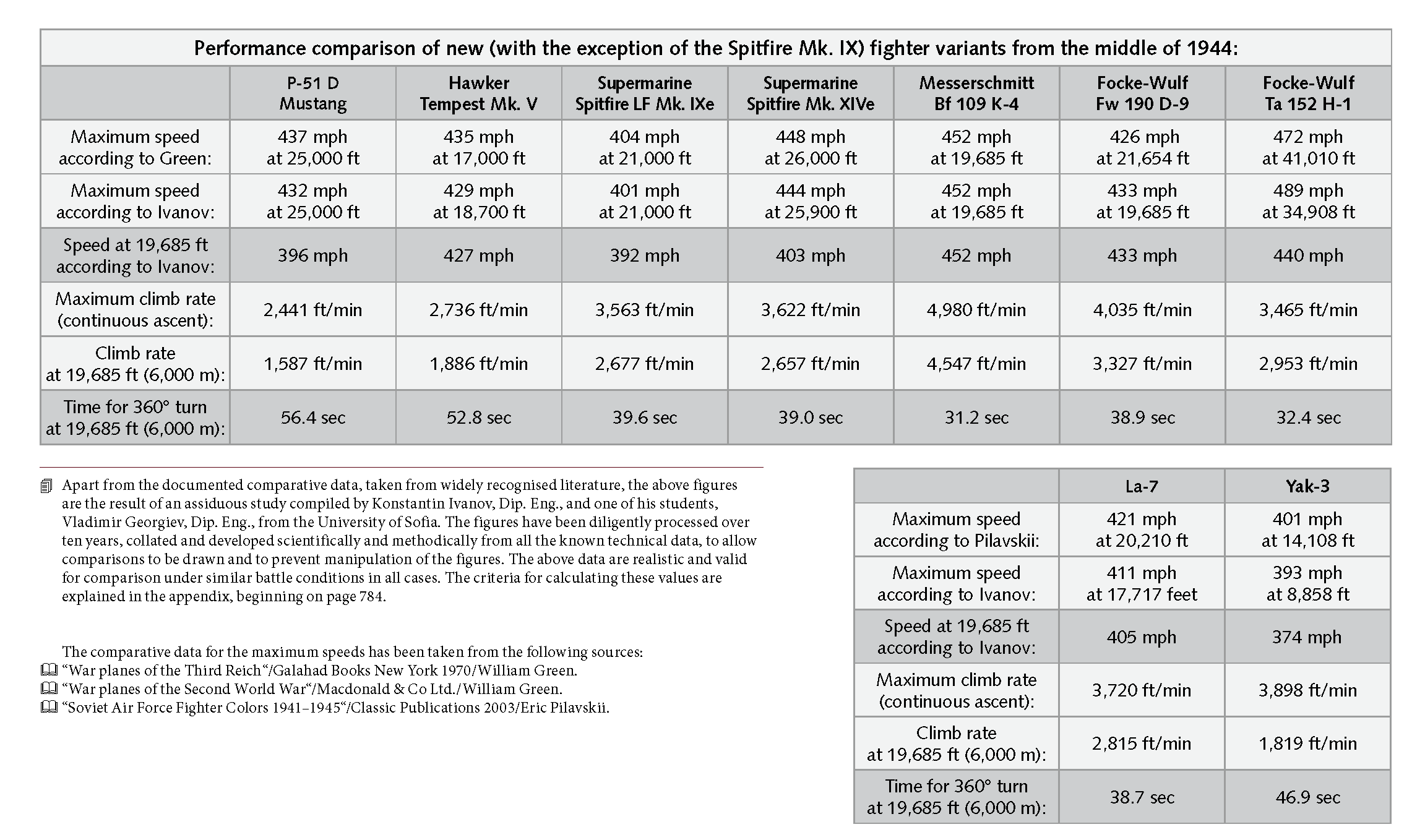 Note: according to the British test pilot Captain Eric Brown the P-51 B Mustang “had no difficulty in out-turning the Messerschmitt” Bf 109 G-6. Walter Eichhorn states quite the contrary. In his evaluation the Bf 109 G-6 was “clearly superior in turning” compared to a P-51 D, which is very similar to the P-51 B. Both generally accepted experts flew the above-mentioned aircraft personally and extensively. Thus both had very qualified first-hand experience. Technical data (see above and also aviatia.net) suggest that Eichhorn is right and the “109” [G– to K-series] was perfectly capable of out-turning a Mustang, but that manoeuvre may have required a flying expertise which most German novice pilots at war’s end never had a chance to gain.  The turning radius of a Hawker Tempest Mk. V is comparable to the Mustang’s rate, while the Supermarine Spitfire (Mk. IX, Mk. XIV) or La-7, Focke-Wulf Fw 190 D-9 and especially Ta-152 H-1 excel in this respect.