The Supermarine Spitfire was a very serious rival to the German Messerschmitt Bf 109, abbreviated Me 109, and it developed during the Battle of Britain in 1940 into a very worthy opponent, although one with different flying qualities. Similar to the case of the Hurricane the Spitfire was superior to the Messerschmitt Bf 109 fighter in a dogfight, since it had considerably better turning ability than its German arch rival.

Example:
A German Me 109 E is in pursuit of a British Spitfire Mk. I. The Spitfire turns as tightly to the left as possible which is more tightly, than the German Me 109 is able to do. The better climbing and diving qualities of the latter are of no use to the pilot in this situation: the bullets from the two machine guns and the two cannon simply pass harmlessly by the tail of the pursued Spitfire and into empty space. 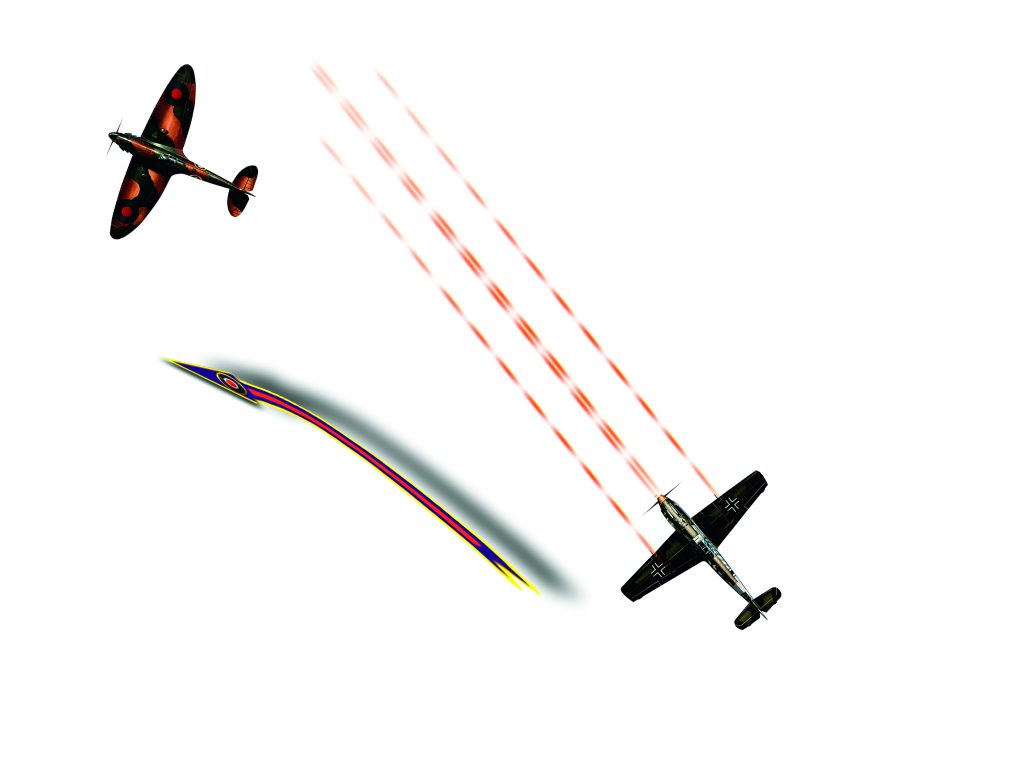 It is the same problem again only this time more perilous for the German pilot. Here a Spitfire is sitting on the tail of an Me 109 in firing position. Instead of diving, which would be the correct action, the German pilot turns to the left. However the Spitfire turns more tightly, and is able to fire the bullets from its complement of eight machine guns ahead of the German Me 109 fighter and into its flight path, greeting the pilot with a hail of bullets.

When it came to maximum speed at level flight there was little to choose between either model: Spitfire (365 mph, 587 km/h), Me 109 E-1 (354 mph, 570 km/h). The Spitfire was somewhat faster at altitudes above 20,000 feet, it was slower at lower altitudes. The slight difference at level flight was of scarcely any significance, but when climbing—at least at altitudes below 20,000 feet—and diving, an Me 109 pilot would be likely to leave any Supermarine Spitfire struggling in its wake.

This had a considerable influence on the preferred combat tactics of the two sides. The Germans would attempt to avoid being drawn into a dogfight, but would instead choose the surprise attack from above with the sun behind them, in order to blind their opponent. After the attack they would immediately dive away only to pull out of the half loop and initiate a further attack. The inflexible British formation with its section of three aircraft—the vic—was tailor-made for this kind of German attack strategy since a measured counter manoeuvre by the British was almost impossible. The only way out for the British fighter aircraft would be for them to break formation and scatter. Consequently the British pilots would be reduced from a group that had strength in numbers to isolated, individual fighters.

One of the most important trump cards of the German Messerschmitt Bf 109 E fighter compared to the British fighter aircraft of the years 1939-1940, the Hawker Hurricane Mark I and the Supermarine Spitfire Mark I and Mark II , was the former’s very powerful 1175 bhp (876 kW) Daimler-Benz-DB-601Aa V-12 injection engine. This engine had a specific, decisive advantage in relation to its British counterpart, the Rolls Royce Merlin II V-12 engine, which was installed in both the Spitfire as well as the Hurricane: its fuel injection. The Rolls Royce Merlin was a powerful 1,030 bhp (768 kW) carburetted engine, the float chambers of which were liable momentarily to interrupt the fuel supply when the aircraft was subject to negative G-force, thereby causing the engine to misfire. The significance of this was that a Messerschmitt Bf 109 E fighter aircraft would be able to switch seamlessly from level flight to an immediate steep dive without creating any difficulties for the engine, since an uninterrupted fuel supply would be guaranteed by means of the injection pump. If a Spitfire pilot were to attempt to perform the same manoeuvre, the negative centrifugal force would cause fuel starvation of the engine. The only option available then to the British pilot would be to half roll the aircraft onto its back, and pull it downwards, rolling upright again once he had reached his desired dive angle. Only in this way would he be able to avoid the effect of “Negative-G“ on his Rolls Royce engine. Once he had successfully completed this manoeuvre the British pilot’s first task would be to try and ascertain where his German opponent might be. Generally the latter would already have quite a head start, and the additional better diving speed of the Messerschmitt Bf 109 would make it impossible to catch up. 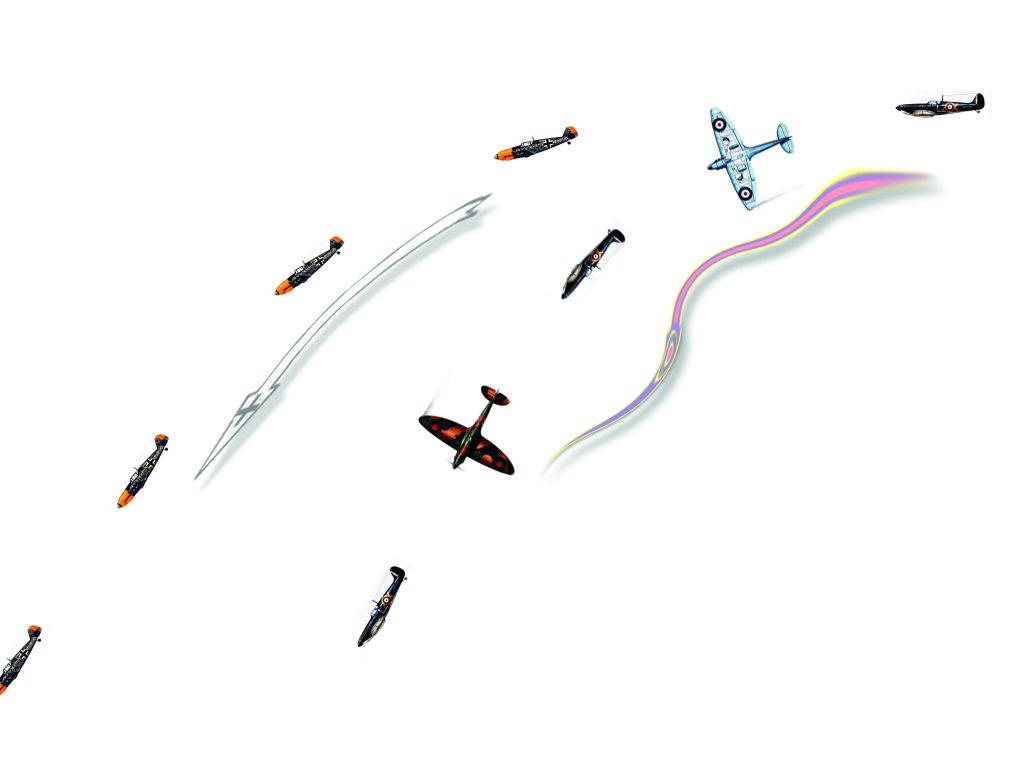 In summary, thus the German Messerschmitt Bf 109 E was faster in the climb and the dive compared to both the British Spitfire Mk. I/Mk. II and Hurricane Mk. I. Its superiority in the speed of climb in respect of the Spitfire, however, diminished more and more at altitudes of 20,000 feet and above. At level flight the Me 109 with its maximum speed of 354 mph was more than a match for the slower Hurricane with 324 mph. In contrast the Spitfire and the Messerschmitt fighter were in this respect almost evenly matched and, therefore, during the war the Spitfire was to develop into its arch rival.

An Me 109 pilot at that time was able to escape both of the Royal Air Force fighter aircraft with relative ease if he were to force his aircraft abruptly into a dive, when there would be very few British pilots capable of pursuing him fast enough. This would later change since the British would of course examine German fighter aircraft that had made emergency landings, and evaluate the findings for development purposes. Naturally the Germans would also be burning the midnight oil.

It was a different story when it came to the dogfight. In this respect both the British models were superior to the German Messerschmitt fighter, and could out-turn it effortlessly. It was therefore inadvisable for a German pilot in an Me 109 to get involved in this kind of combat, unless it were absolutely unavoidable. In such a case it would come down to individual flying expertise and in 1940 this was still in plentiful supply. The quality of the training of German pilots including the new generation, was excellent. Eventually however the relentless toll of the war in the air over the years would see that situation drastically change.

The German pilot again held the upper hand in respect of armament. Whereas only a few direct hits from his canon would be needed to signal the end for an enemy fighter, the smaller calibre guns of the British aircraft required hits in a very large number to achieve the desired outcome. Consequently that was why the British fighters had twice as many weapons on board as the German Me 109, although in the case of the almost exclusively installed A-wing model, these were without exception only ever machine guns