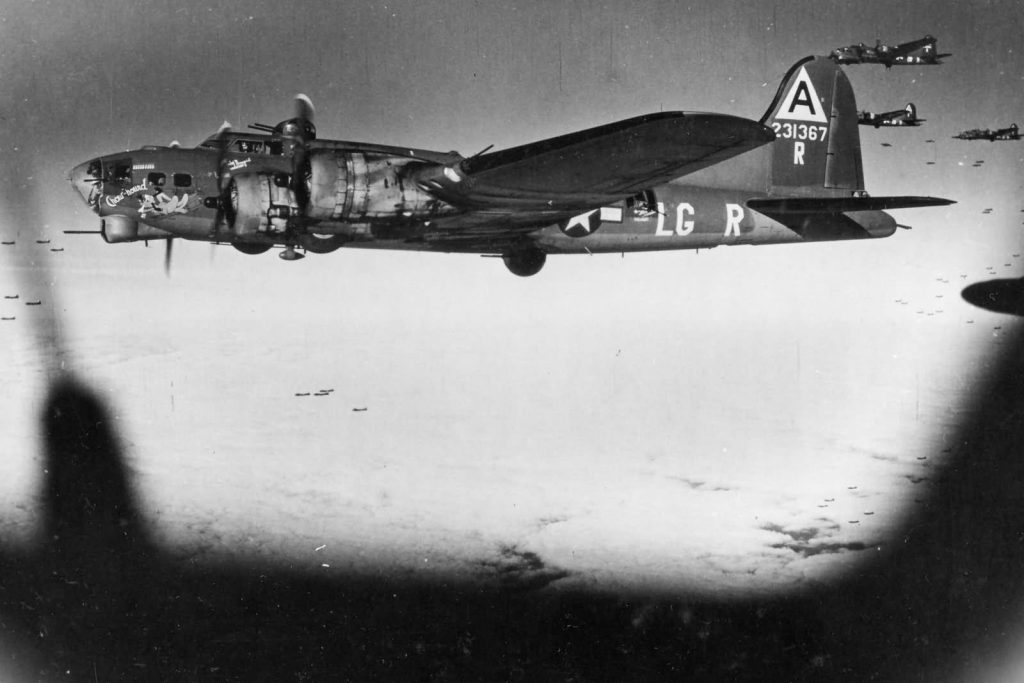 On 17th August 1942 Boeing B-17 Es penetrated enemy territory for the first time. Twelve four-engined bombers of 97th Bombardment Group (or Bomb Group, BG) approached the railway installations of Rouen-Sotteville. The formation was led by Brigadier General Ira Eaker in person, and escort was provided by British Spitfires.

The British Spitfire fighter interceptors were only able to cover the US bombers on raids deep into France or over Germany’s air space for a part of the mission, however. Although the American P-47 Thunderbolt and P-38 Lightning escort fighters, as such, had a greater range than the Spitfire, they were at present only available in very limited number, and in addition needed certain technical improvements to be carried out before they would be fully ready for the task.

The Flying Fortresses, therefore, had to make do without the assistance of their little friends, the fighter escort, beyond the German border, and were left to their own devices to defend themselves against German fighter pilots, as they had done so far. The commanders of the 8th US Air Force had hoped and expected the massed defensive fire power of the tightly grouped, heavily armed bombers during raids deep in the heart of Germany would be sufficient to ward off the German fighter pilots and keep them at bay.

It did not work. Neither the US military commanders nor those of the Royal Air Force had reckoned with the grim resistance which they now faced from the Luftwaffe and which would in fact be sustained almost right until the final day of the conflict.

On 27th January 1943 306th BG ventured on its first attack on German soil with a bombing raid on Wilhelmshaven. Frontal attacks by interceptor fighters took their toll. Nevertheless, the commanders of 8th USAAF were pleasantly surprised with the low number of losses, which, at clearly below the 10 % rate, were considered acceptable. Understandably, the bomber crews had their own opinions on what constituted an acceptable loss rate.

At command level the crews were set the objective of 25 missions, after which they would be able to return home. Yet the morale among the crews was to take a battering since 80 % of the bombers were shot down before they had completed their 25 missions. The first B-17 crew to survive 25 missions was the crew of B-17 F-25-BO N° 41-24577 “Hell’s Angels“ VK D of 358th Bomb Squadron/303rd Bomb Group under Captain Irl Baldwin, which happily achieved their quota on 13th May 1943. It was closely followed by a Boeing B-17 F-10-BO, serial number 41-24485, from 324th Bomb Squadron/91st Bomb Group. The considerably better known “Memphis Belle“, DF A coded, under Captain Robert K. Morgan concluded their 25th tour of duty six days later on 19th May 1943. On five occasions some of this aircraft’s engines had been set ablaze, and once it returned home with its tail unit almost shot off.

After May 1943 American losses began to increase. There were now some 600 B-17 Fs in Britain, while the Luftwaffe had a combined total of only 1,360 fighter aircraft on all fronts at the beginning of 1943, and only 908 of these were fully operational. The 8th USAAF introduced a so-called blitz week, which resulted in the impressive loss of 128 of the Boeings—a loss rate of more than 20 %. Despite the haemorrhage even more ambitious plans were devised.

On 17th August 1943 the largest B-17 force yet assembled (altogether 376 Boeing B-17 bombers in two attack formations) set out to bomb Schweinfurt and Regensburg. The first formation comprised 146 bombers and their target was the Messerschmitt factories in Regensburg. The Germans knew full well that the escort fighters could not travel the whole distance with the bombers, so they waited until they turned away.

Then they themselves turned to attack. From that point on the German fighter pilots would not allow the American crews a single moment’s respite. Whole lines of six fighter aircraft, wingtip-to-wingtip, blasted their way through the bomber formations. Others were attacking from the front, resembling, in the words of a navigator, “queuing up at feeding time!” 100th BG, formed the formation’s “coffin corner“, flying in deep line astern, farthest to the rear. The “box“ was soon torn open and the fighters dived like wolves on the American bombers as they broke away. It took 90 minutes from the time the escorts were left behind for the four-engined bombers to reach their target, during which time they were continually harassed. The remaining badly damaged bombers escaped according to plan across the Alps to the allied airfields of North Africa.

The second attack on the ball-bearing factories in Schweinfurt had been intended to take place almost simultaneously. However, a sudden blanket of fog in England prevented the take-off of the bomber formations at the scheduled time. Thus the German fighters had long since refuelled and rearmed as the 230 Flying Fortresses of the second formation crossed into the territory of the Reich. After the attack this armada did not continue to fly south but had to fight all the way back to Britain through enemy territory. The German fighters took off again, in some cases for the third time, in order once more to provide the Americans with a warm reception on their return flight. It was not until the American Thunderbolts raced to the rescue of their stricken comrades in the Boeings over Holland and Belgium that the Germans left the bombers alone.

A total of 60 B-17s were shot down, a huge number which constituted a loss rate of 16 %. In addition four more were so badly damaged that they were written off which raised the loss rate a further one percent. Furthermore, 168 of the bombers were hit but were worth repairing after their return. Three of the P-47 fighter pilots who came to their comrades’ assistance lost their lives, making the total number of allied aircraft lost 67, including the three Thunderbolts. The human cost was terrible: 559 bomber crew members would never see Britain again and 21 were wounded.

The Germans lost 38 fighter aircraft and 15 pilots to the bombers’ gunners and the P-47 escort. Another 22 fighter aircraft were damaged and 16 pilots were put temporarily out of action through injury.

On 14th October 1943 Schweinfurt was again the target. Now the German fighters attacked earlier, this time taking on the US Thunderbolt escort fighters. In so doing they forced them to jettison the drop tanks with which they were now equipped—but still did not give them sufficient range—and thus reduced their range even further. Then the German fighters withdrew and waited for the Thunderbolts’ premature departure. Now the haemorrhage of the 320 bombers began. When the battle was over 60 more of the B-17 bombers had been destroyed, seven returned so badly shot up they were scrapped. One of the P-47s was also shot down and another four were write-offs on landing, thus US losses totalled 72. A further 138 B-17 bombers and two P-47s were in need of repair. A total of 601 men of the USAAF were killed or missing in action and 40 were wounded.

The Germans lost 34 of their fighter aircraft and 16 of their pilots died. In addition they also sustained damage to 29 aircraft and 13 wounded airmen.

B-17 losses at this level were not sustainable and would in the long run mean the wholesale destruction of the 8th USAAF. The US crews felt they were flying suicide missions. Despite their obvious frustration the commanders of the 8th US Air Force were ultimately left with no alternative but to discontinue daylight operations into the heart of the German Reich. It appeared as if the German fighters of Göring’s Luftwaffe had prevailed and decided victory in the daytime battle for German air space in their favour.

The need for an American long-range fighter designed specifically to have sufficient range to penetrate deep into the heart of Germany, equipped moreover with improved drop tanks, had in the autumn of 1943 become a matter of life and death for the bomber crews of the Flying Fortresses.

Without their own US fighter aircraft to provide cover throughout entire operations, the US ambitions would be thwarted.

Only months later, when the US long range escort fighter P-51 Mustang and technically considerably improved drop tanks became available, the Luftwaffe’s fate would be sealed.

During the Second World War the Americans lost, at the hands of Germany and her allies, a total of 4,754 B-17 Flying Fortress bombers, 2,112 B-24 Liberator bombers, 2,201 P-51 Mustang fighters, 1,043 P-47 Thunderbolt fighters and 451 P-38 Lightning fighters, making altogether 10,561 of these five types of aircraft alone. Taking the most famous US bomber, the Boeing B-17 Flying Fortress, separately, the number of casualties (killed or wounded) among its operational crew members amounted to some 46,500.